Super Bowl was Fixed Here is Why | Super Bowl Recap 2022 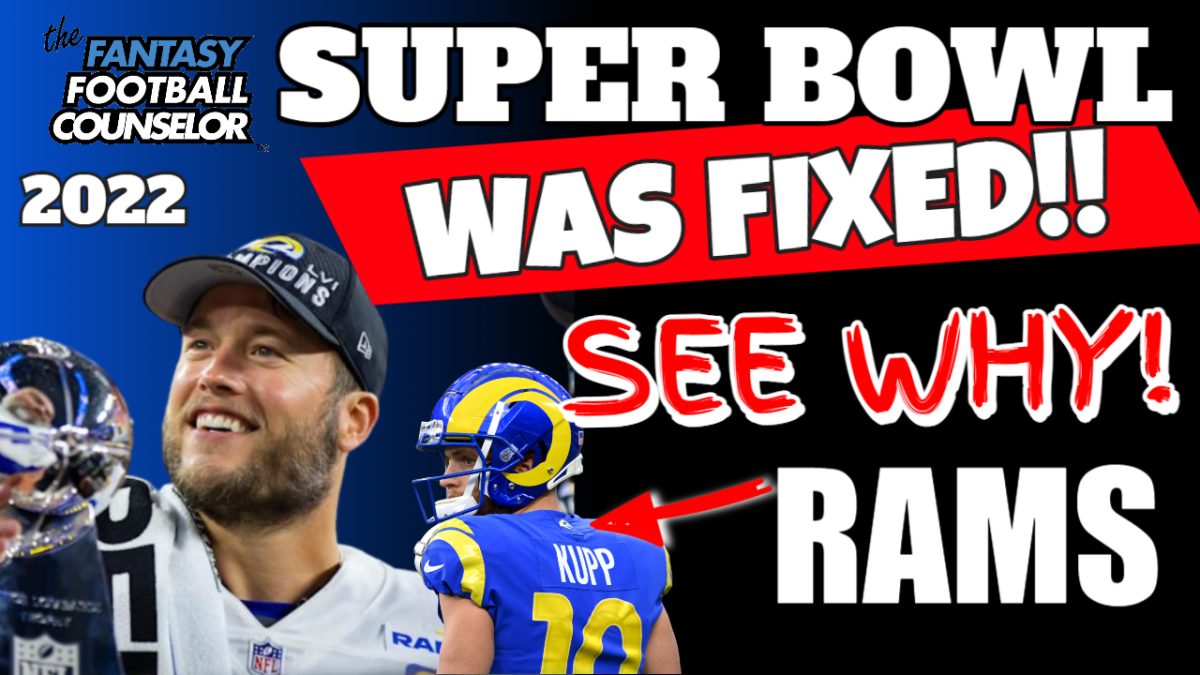 The Rams were primed to win and see the reasons why. Super Bowl Recap and discussion:

Today, I want to talk a little bit about the Super Bowl recap, Rams versus the Bengals, and how the fix was definitely in. I definitely have a clip where you have to check out. I had Brian Tuohy on this show, the author of “The Fix Is In,” a great book explaining how sports gaming is fixed. This video I launched about two months ago, I had him on this show, organically it got over 114,000 views. A lot of interest around the fixing of games, and a lot of people are starting to wake up to this, and in this video, we actually explain, or Brian does for that matter, explains how the Rams were primed to win the Super Bowl this year. This is absolutely amazing, you have to check this out. This is phenomenal. I’m going to roll the clip here. It’s about two minutes, two and a half minutes.

I go on about Odell Beckham Jr and how he is super remarkable, and he goes on in regards to why he thinks the Rams are going to win, in regards to SoFi Stadium, and he has his explanation. But what’s remarkable about this is, this was before the Rams made the playoffs, this was back in November. This was mid-November, so this was very early, prior to the Rams winning the Super Bowl. You have to listen to this, watch this clip, and in the comments below, let me know what you guys think. If you watched the game yesterday, the Rams were driving, and there was a ball thrown, I think it was two Cooper Kupp, and it was called a holding call, but it wasn’t a holding call, and that put them at first and goal, and put the Rams in position to take the lead for that game.

I think the Bengals would’ve won this game. They had them, they would’ve probably kicked the field goal and been down one. The Rams would’ve kicked the field goal because it was third down and change. And now they’re in position at first and goal because of that terrible call, the pass interference holding call, which I don’t think was a pass interference holding call. You got to listen to this, watch the video, how we called it on the show, Brian more or less called it. I hinted at it, but you’re going to watch this video and you’re going to see, “oh my God, this is kind of obvious,” and proves my point that it was actually fixed. Check them out, guys. Again, Los Angeles, huge stadium they paid for back in September 2020 huge market.

The Rams, LA, celebrities, big deal, very brandable. Part of me was thinking, okay, maybe Joe Burrow’s going to win this thing. Joe Burrow, building Burrow, but they’ve built Burrow enough. He got to the Super Bowl, and I was hoping I was wrong. That’s why I was like, “I got to go building Burrow to prove this theory wrong.” But anyway, watch this clip. Let me know what you guys think, and I’ll talk after this clip is played here. Listen to how I talk about Odell, and how he gets into how this thing is fixed. This is astonishing. Check this out.

Here is the dialogue between Brian and me on this “Fix is in” a youtube video we did back in Nov 2021: https://www.youtube.com/watch?v=wDnwqGYmsMo&t=1229s

Oh, sticking on the player thing. Let’s use Odell Beckham Jr. for example, the guy sucks. He’s not a good player. I don’t care what anyone says. He’s a trash player. He’s slightly above par, if best. He had one good catch though.

One good catch and I looked at his average, he’s averaged three touchdowns per season. He’s only finished two full seasons, his entire career. They pump him and pump him and pump him. He’s a marketable guy, they pump him and pump him. I’ll give you an example. Yesterday, there was a game, he’s on the Rams, Deebo Samuel, who I had on my show, better player, no talk about him in the media, just about Odell being on the Rams. He had two catches the whole game. I know he didn’t get a lot of playing time, he’s got to learn the playbook, yadda, yadda, but he is not good. Yet, the NFL keeps pumping this guy, they love him, they’re on his junk. Why is that? Is it just because he’s a marketable guy? I think it’s because he was built up, and they’re saving face or something, it’s weird, man. Let this guy go, it’s a market, I don’t get it.

Yeah, they do that. I think Matt Stafford’s another guy. They could care less about Matt Stafford, the media in the NFL when he was on the Lions. But suddenly he’s on the Rams-

He’s the savior of the Rams. They’re like, “oh my God, this guy’s been an incredible quarterback for 15 years.” Nobody cared about him. Nobody ever said he was an incredible quarterback. He was the Lions quarterback. He was good, but he wasn’t incredible. But all of a sudden, this season they started hyping him up like he’s the second coming, which makes me think that the Rams are going to go somewhere the season in the playoffs, regardless of what they’ve done the past couple of games.

Like you say, now they got Beckham there, they got Von Miller, who’s really at the end of his career, he hasn’t done too much for the Broncos since he won the Super Bowl with Peyton Manning. It’s like they built the super team that’s in the super stadium where the owners spent $5 billion to build it, and despite the fact that he is in a lawsuit with the city of St. Louis over relocation.

It seems like they’re pumping the Rams up for something this season because the Super Bowl’s going to be held in LA again this year too. Maybe back-to-back home Super Bowls, I don’t know. It just seems odd, you see certain guys get pushed in ways that don’t make sense sometimes.

We thought about this in WWE, back in the day, where we were like, “oh no, wrestling was real, blah, blah.” Back in the eighties, early nineties. Then we figured out that it was a show, and I’m not saying all of this is a show, but I think a good portion of it is a show, and a big portion of it is probably fixed. If you guys have not checked out this episode, I implore you guys, to click on the link, watch the whole episode here with Brian Tuohy. If you are new the channel, make sure you guys do subscribe, because I will be talking about NFL. We’ll be talking about everything about sports, MMA, and of course fantasy football is what I focus on here. But again, in regards to recapping yesterday’s game, I really think the Bengals had that game.

I really do. I think it was like what, 2016. And again, it was third and, what is it? Third and long or whatever it was, third and change, and then they had that holding call. They wouldn’t have converted that third down, it would’ve been fourth down. They had to either kick a field goal or go on a fourth down. Or was it fourth down? Either way, the point of the matter is they converted that first down, and at the end of the day, it just seemed obvious that the Rams were going to win that game because everything was set up. It was a Cinderella story, it was perfect. The celebrities were there, the stars were aligning. Yeah, it is what it is. The Rams won it, congrats to them. But again, as I said, Stafford was important prior to being on the Rams. Odell, they conveniently put him on the Rams, knowing this team was going to make it.

He’s a marketable guy. All part of a great storyline. Cooper Kupp, he’s had this amazing year, amazing season, he’s doing really well. It’s all a great story, and I heard Van Jefferson actually ended up having a baby just after the game. He had four receptions in the game and then he ended up having a baby. All great storylines, more headlines, the baby had nothing to do with the fix, but I’m trying to say, it was just a great story all around, a feel-good story. Keep the ratings up, keep the advertisers, and that’s exactly what happened. The Rams got their fix this year, they were primed to win, and that’s how it worked out. Again, if you haven’t checked it out guys, check it out. Brian Tuohy here, check out the show here.

And if you are new to the channel, make sure you guys do click that subscribe button. I do talk about other stuff other than fantasy football. And let me know below, let me know your comments, was that a holding call at the end? I think the fix was definitely, in love to get your feedback. All right guys, thanks for being here, Super Bowl is now done. We got to go what, six months now or something like that without football? This is crazy because I really enjoy watching football. It’s a little bit of a time off right now, but it is what it is, and yeah, we just got to watch other things. UFC is one thing that gets me through the off season a little bit. All right guys, thanks for being here. Subscribe. Let me know in the comments below what you think, I’m out.