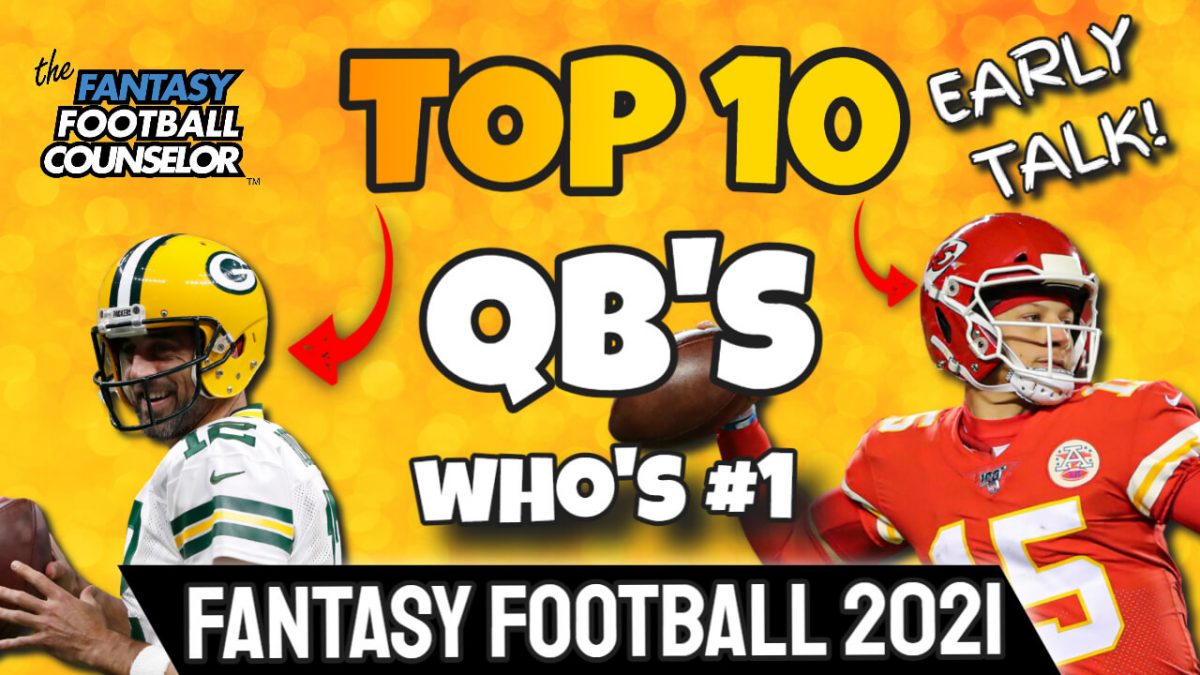 Instead of just posting a list and having people just look at it, let’s dive into the reasons why these guys are in the Top 10 amongst the quarterback rankings.

Well, there really isn’t must to say about Patrick Mahomes that people already don’t know. He is the highest and arguably the best QB in the NFL today.  In 2021, Mahomes finishes 4th in Fantasy points ( 374.4),  5th in passing attempts (588), and 5th in passer rating of 108.23. Most would agree this was a down year for the young stud. Kansas City continues to be a high octane offense and will continue to produce on a high level as long as Patrick is there. I would also say that the Super Bowl loss will add a chip to his shoulder and he will want to redeem himself for that terrible loss to the Bucs. I will personally not be drafting Patrick Mahomes in fantasy football 2021. I never invest too early in acquiring a QB as there is a lot of depth at this position.

Talk about a guy that has proven he is elite. Josh Allen is a guy that people said was not that good and had bad accuracy with his passing. He proved all the mainstream fantasy analysts and media wrong. This is a guy I believed in years ago while the consensus analysts were all over Baker Mayfield. Now everyone is riding the Josh Allen train. That is understandable because he finished 1st in fantasy points last season amongst quarterbacks. ( 395.06). He even outdid Aaron Rodgers who won the MVP.  I am excited about Josh Allen but loved getting him for value when the sheep and mainstream were sleeping on him. I am going to avoid him this season because I will not pay a 2nd or 3rd round draft pick on him and you should not either.

While the consensus currently has Dak Prescott at six in their rankings, I have him higher. I still believe people will be sleeping on his because he is coming off that injury. People in your fantasy football drafts may overlook him because they typically draft on recency bias. His ADP will fall in my opinion and you will be very happy to acquire him on your roster this season. His upside and the talent around him are something we should all be excited about.

Mr. Consistent as they come. Russell Wilson is a seasoned vet that gets it done all the time. Barring any type of injury expect Wilson to continue his consistent success. I love that DK Metcalf is really coming into his own as well and doing great. There is a ton of upside for this offense. The main issue is that Wilson gets hit a lot and that O-line needs to be addressed. If so, look for a monster year from this man and a solid fantasy producer for you. The nice thing is that the mainstream consensus will be sleeping on him and you can still get him after the 4th round in your drafts.

Coming off a pinnacle year last year, expect Aaron Rodgers to be really expensive this season in your fantasy football leagues.  48 Touchdowns and only 5 interceptions last year were absolutely incredible and won’t happen again. I just don’t see these types of numbers for a guy that has been in the league this long. I mean it is possible but coming off an MVP year, you would expect things to go down. If I can get him after the 5th round I would consider it, but people will try to scoop him up early buying last year’s recency bias.  If funny prior to 2020, no one was really talking about him and now everyone wants him. Funny how this works every single year. The mainstream and four-letter networks sleep on a guy, and as soon as he booms they ride him. You have to skate to where the puck is going so you are always ahead of the mainstream. That is what I teach in my 16 Rounds Draft Solution.

Young, dynamic and teamed up with Hopkins is enough for me to keep Kyler in my top 10. That and the fact that he had a great year last year finishing 3rd amongst QBs with 378.74 points.  I would like to see his Touchdown passes increase and 16 last year just isn’t enough. Note he has 11 rushing touchdowns on 133 attempts which really inflated his numbers. If he can continue to pound the rock in the endzone, you have a winner here. I feel Arizona doesn’t have a good running back committee, and that is why Kyler does so well rushing the ball in. If they get a real runner look for the fantasy points of Kyler to go down.

Justin Herbert and his upside really excites me. He along with guys like Mahomes are really the future of the NFL as guys like Brady and Brees are getting older and leaving the NFL. He impressed me finished 9th in fantasy points last season amongst QB’s and throwing  31 TDs to only 10 interceptions. I feel there is a ton of room for growth and development for this man who won the Rookie of the year title.  I think the ceiling here is massive and if you do decide to grab him make sure you get a safe backup in case he does bust. With upside comes risk and I am willing to take the risk with Herbert.

While being paid a lot and unhappy in Houston, he still ended up putting up some solid fantasy points. Deshaun Watson finished 5th in fantasy points last year 369.32. This is while having a terrible O-line and mediocre wide receivers. Depending on if he gets traded and where he lands there will have to an adjustment phase. Signs are pointing to Carolina. He should be safe and solid here as the receivers are an upgrade from last season. I am suspicious about him adapting to a new environment and that may impact his fantasy production for better or for worse. I think he is top 10 worthy, but a guy that could fall out. Too much upside but a lot of uncertainty.

Everyone except me the Fantasy Football Counselor slept on Ryan Tannehill. He has really proven that he is a fantasy producer and gets it done each and every year. His ceiling is limited as they are a run-first team with the beast that is Derrick Henry, but I still love the safe and secure pick of Ryan in Fantasy.

Mr. Reliable Tom Brady. How can you go wrong with a guy that almost always finishes in the top 10. I was torn on who to put in this spot. I was also looking at Lamar Jackson and Matt Ryan. Ryan is due for a bounce-back season and has the weapons to easily be in the Top 10. I chose Brady because he should be out of the league in the next few years, and I don’t see him going out weak. He will finish his career strong and cement his legacy. I will be watching Brady closely over the next few years and witnessing greatness in his last few years in the league. The weapons and his talent are a sure-fire fantasy football option in your drafts.

Now as you know with fantasy football rankings is that they change and often. With the QB position, what you see is pretty much what you get. There is a less volatile movement within the rankings. You may get your breakouts here and there but you will get a solid performance from the guys mentioned here in the article barring any type of unforeseen injury. Watch the Full Video on the top 10 QB rankings

To know exactly where to draft these studs at the QB position make sure you get the 16 Rounds Draft Solution 2021. This is the game -changer and it will help you dominate your leagues.

Make sure you are subscribed to this #1 fantasy football podcast to dominate your leagues. Also, follow FTFN for all the latest NFL news, note, and analysis from the top analysts in the games.